Marijuana sales surge during the pandemic

BREMERTON — Her Manette salon shuttered at the onset of the pandemic, Michelle Burke-Reynaga found herself in an “Alice and Wonderland hole.”

“I cried and I slept a lot those first two weeks,” said the stylist, who has rarely taken time off in a 36-year styling career. “I spent a lot of time reflecting.”

Burke-Reynaga has often vaped some marijuana to manage anxiety. With the stay-at-home order, she lost her livelihood while bills, including rent, continued to mount. Because she feared a respiratory illness, she felt it best to switch to a peanut-butter cup edible of indica cannabis to chill out — and bump up her consumption a bit.

“I got into a funk,” the extrovert admitted. “I didn’t get off the couch.”

It may not come as a shock that Washington’s marijuana sales are surging in the time of a pandemic when many have lost their jobs and remain homebound during Gov. Jay Inslee’s stay at home order. And sure enough, the numbers are in: pot sales in Washington increased by 21% year over year, March 2019 to March 2020, according to Brian Smith, a spokesman for the state’s liquor and cannabis board. 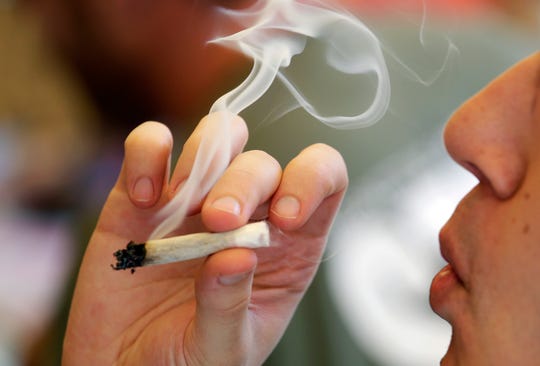 A man smokes a marijuana joint in this April 2016 photo. Marijuana sales increased by more than a fifth in Washington state at the start of the COVID-19 pandemic. (Photo: Elaine Thompson, AP)

Even from February to March, the state’s tax take from marijuana grew from $34.7 million to $41.3 million, at a time when Washington’s primary sales tax revenues were likely plummeting.

Indeed, every month brings a new sales record to Better Buds Silverdale. Its sales increased $31,000 from March to April, according to Aaron Meites, its manager and buyer.

“On the weekends, we’re getting cleaned out,” Meites said.

It wasn’t just the 4/20 holiday, he said. He’s noticed a lot of first-time customers, some who have lost their jobs, and some who say that they’re able to partake without fear of being drug-tested. Sales overall have increased 30%.

The pandemic has slowed his supply from getting to Better Buds’ shops in Port Hadlock, Silverdale and Longview, he said. What used to take less than a week for deliveries is now taking two. And customers appear to be attempting to limit trips by buying in bulk, he noted.

“Every time I order, I bump the quantity up,” he said.

The stresses of pandemic life — be it getting sick, losing a job or even housing — seem to have steered some toward pot. “Ganja helps me relax, calm my mind,” said Gigi Lee of Port Orchard. “Helps keep things a little lighter.”

It’s a means to escape. Products like alcohol sell well in recessions and other crises. Smith, of the state’s liquor and cannabis board, said taxes on spirits are reported quarterly, rather than monthly, so a picture of those sales during the pandemic has not fully materialized. Beer and wine taxes, levied on the breweries and wineries themselves, are down, at least so far, from 2019.

For Burke-Reynaga, it got to be too much. A phone call from her mom got her moving, showered and going again. She’s since cut down on the edibles.

She hopes to have Sunset Styling Studio reopened in early June, albeit with new social distancing and hygiene restrictions as mandated by the state.

“I realized, I’ve gotta snap out of this, I’ve got a business to run,” Burke-Reynaga said, quoting Alice in Wonderland once more: “I’ve got a tea party to make.”