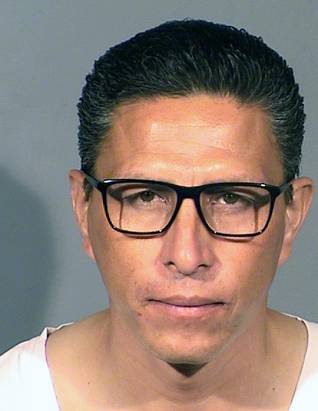 When a prominent Las Vegas Valley businessman, a cop and a firefighter bought a hemp farm in Pahrump early last year, they seemingly intended to make their money legally.

But hemp wasn’t as profitable as they initially thought, and months later as their investment’s value dwindled, they conspired to spray the product with THC, the main compound that causes a marijuana high, according to Metro Police.

Weeks after surveilling the trio, Metro on April 30 arrested one of their own, Officer Jesus Najera, and Eduardo Garcia, a supervisor with the Nevada Division of Forestry, on drug trafficking charges.

The next day, two detectives showed up at the house of the man they allege led the operation, Norberto Madrigal, owner of two legal cannabis entities among his other businesses.

Madrigal, 42, said he could explain why he sprayed hemp with THC, but otherwise said he wouldn’t cooperate further without an attorney present, police said.

When they returned to his house Wednesday, they had enough to arrest him on three counts of conspiracy to violate the Uniform Controlled Substances Act and one count each of trafficking marijuana (between 100 and 2,000 pounds), records show.

Madrigal was released from jail on his own recognizance Thursday, Las Vegas Justice Court records show.

Madrigal’s 42-page arrest report documents an operation he and the other suspects struggled to mount.

And although a fourth associate once referred to Madrigal as “Walter White,” the main character in the hit TV series “Breaking Bad,” the text messages described the operation as anything but meticulous.

They lost a big sale when their hemp smoked like “hay,” and they oftentimes failed to find the right supplies, according to the report. A marijuana sample they gave to a Metro informant failed to register as anything more than hemp when tested by police.

The marijuana’s quality improved, but it wasn’t long before Metro, who’d been investigating since February, homed in on arrests and raided Madrigal’s warehouse, Garcia’s house and Najera’s apartment.

Najera, 34, who was hired by Metro in 2016, was jailed on three counts of conspiracy to violate the Uniform Controlled Substances Act and one count each of trafficking of THC, trafficking of marijuana and possession of cocaine, police said.

Both men have since bailed out. It wasn’t clear if they had attorneys who could speak on their behalf.

Police said the text messages clearly implicate three suspects in the illicit manufacturing and sale of marijuana. According to the report, the suspects shared photos of the tools they used, discussed turning the hemp into marijuana and sales.

A video filmed by Garcia, and shared with the Metro informant, showed Madrigal spraying hemp with THC at the warehouse, police allege.

On Wednesday, detectives found 40 bags of a “green leafy substance” in Madrigal’s house that was similar to the bags found in the warehouse two weeks earlier, police said.

On March 21, a few days into the closures prompted by the coronavirus pandemic, Garcia suggested the trio create more pot. It was a way to make money because the dispensaries had closed and it was “a good opportunity to make money,” the trio said, according to police.

“Perfecto, let’s do it !!!! We need money,” Najera allegedly responded.