Bangkok sting results in seizure of 221 kilograms of marijuana


Yesterday police in the northeastern province of Mukdaham announced the seizure of 616 kilograms of marijuana, valued at more than 6 million baht.

Police got a tip that 3 cars were going to smuggle marijuana across the province, and laid an ambush. At about 5am today, officers noticed the 3 suspect cars coming into Mukdaham, passing the Nong Ian security junction. Reportedly a black Isuzu pickup truck with Chon Buri registration was followed by a white Nissan registered in Bangkok and a black Isuzu pickup truck, also from Chonburi.

The ambush team waited at a petrol station opposite the security junction and were given the green light to make the arrests, but 2 of the cars spotted them and fled in different directions.

Police pursued the suspects’ cars and arrested Boonchu, the driver of the black pickup truck. They inspected the vehicle and found 14 sacks of marijuana, divided into 44 bags each, weighing 616 kilograms.

Under interrogation Boonchu admitted the marijuana destined for Bang Na District in Bangkok, for which he would receive 50,000 baht on delivery. Officers brought Boonchu along with the marijuana back to their station. 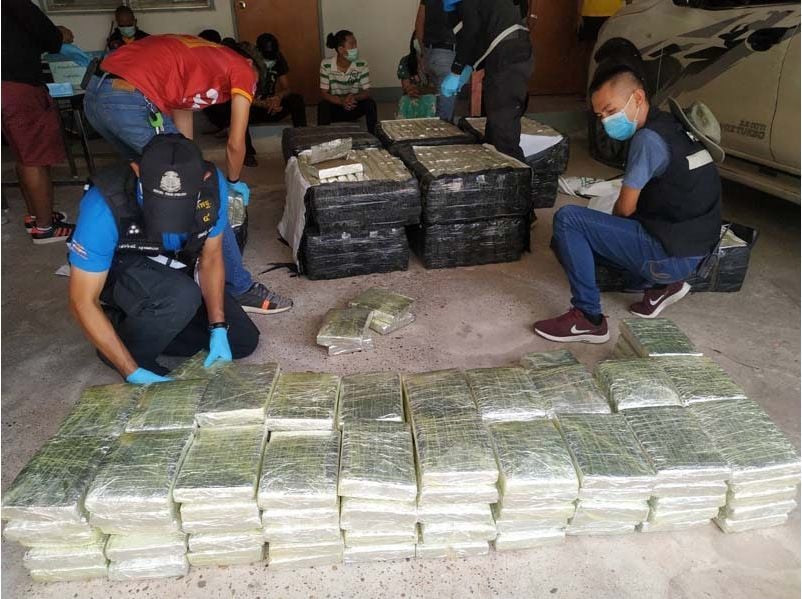 The other officers intercepted the second black Isuzu pickup truck,driven by Kittiphong with Wilawan as the front passenger and Somboon sitting in the back. The car and the passengers were searched, but nothing illegal was found.

Under questioning, Kittiphong admitted that he was a guide, and they were going to drive to Bangkok.

All 5 suspects were detained at the Khamcha-i police station and charged with illegally possessing and selling a Category 5 drug (marijuana). Kittipong tested positive for consumption of methamphetamine. All suspects are in custody pending legal proceedings.